For those who may not be privy to the mechanics of the fashion industry and have no idea what the widely circulated term “fast fashion” means, here’s a brief rundown: At its core, fast fashion refers to the tendency of big retailers to mass produce pieces that look like they’re fresh off the runway. Go to any second-hand clothing junkie’s YouTube channel, and you’ll likely find a rant or two that condemns this industrial practice. Scroll through any Instagram influencer’s multitude of #OOTD posts, and you’ll likely find them tagging their outfits with the very brands who have been major contributors to the wasteful consumer culture currently infecting the world.

The term “fast fashion” surfaced in the late ’90s to describe a business model in which retailers would respond to ever-shifting runway trends by producing their own cost-efficient alternatives for consumers. Since its conception, fast fashion encompasses any and all brands that sell cheap and trendy clothing, including, but not limited to: H&M, Zara, Forever 21, Topshop and burgeoning online wholesale shops, such as Romwe, SheIn, Wish, and Yesstyle.

While many shoppers who support fast fashion retailers because of their affordable and accessible clothing, the consequences of fast fashion production cannot be ignored. Fast fashion severely strains the environment, as textile dyeing heavily pollutes water, and cotton growing requires an incredible amount of water and pesticides to ensure successful plant growth. Apart from these environmental impacts, fast fashion production is incredibly damaging to factory workers worldwide, who can be paid as little as $1-$3 dollars a day while producing garments in often dangerous environments. Textile waste is also a considerable issue: In 2013, 12.8 million tons of textiles were sent to American landfills.

But there’s an underrated solution to these abuses: second-hand clothing. Shopping for second-hand clothes greatly reduces the amount of waste produced by discarded garments. If each article of clothing was given a second home instead of being tossed out, waste and emissions would be reduced by 73 percent.

Here’s why people have a problem with shopping for second-hand clothing: While thrift shops and consignment stores may be good for acquiring wardrobe basics, shoppers have a difficult time finding trendy pieces that have the same style and silhouette as those on the runway. This isn’t an entirely baseless claim: When I first began my thrifting journey, I shared these exact same worries. However, after gradually adopting thrifting as a hobby, I realized that it allowed me to experiment with new silhouettes that weren’t exact replicas of those on the runway and in fast fashion stores, but which ultimately heightened the trends I was trying to emulate. Realizing the pivotal role of second-hand clothing has helped me develop my personal style. That’s why I became motivated to create this series, Sustainable Style, which will center on signature fall/winter 2018 fashion trends and explore the ways in which these elements can be replicated and even elevated using second-hand clothing to create imaginative yet fashion-forward looks.

For the first outfit of this series, I styled a neon look (what a coincidence!), one of the most signature trends of fall 2018. I drew inspiration from the F/W 2018 ready-to-wear collections of designers ranging from Versace to Korean streetwear designer, Juun.J. I was also influenced by various Instagram and YouTube fashion personalities, such as Sweden-based duo TheLineUp and Los Angeles-based Shahd Batal.

I decided that the best way for me to approach the trend was to make my neon piece the focal point of the look and have the rest of the outfit be pretty monotone. I wanted to show how serving looks is totally possible with second-hand clothing, so I thought taking the streetwear approach would serve this look best. These predominantly black pieces elevated the outfit while allowing it to be centered around one neon piece. The star of my outfit, a slightly cropped, ribbed neon green tank top, is from the Goodwill on Hollywood Blvd. Its structure and length make it perfect for layering. And the color, while being considerably saturated, is still bearable. Plus, it pairs well with light-wash denim.

Opting for a more androgynous silhouette, I selected a pair of black polyester Everlast track pants from the same Goodwill. While these pants are relatively simple, they pronounce the streetwear element of the look. The zipper detail is a fun addition, but it really adds dimension to the whole ‘fit when left unzipped. This Eastport shoulder bag, which I bought from Berda Paradise Thrift Store on Sunset Blvd., was my take on this year’s quintessential fanny pack/side bag trend. This bag pairs best with sportswear-centric outfits, but could also be juxtaposed with a blazer and trousers or a bodycon dress.

Feeling the need to further accessorize my outfit, I settled on this silver chain necklace from the Council Thrift Shop on Pico Blvd. It’s delicate enough to contrast the androgyny of my look with a touch of femininity, while being minimalistic enough to fit in with the look’s ruggedness. A string of costume pearls could have also sufficed, as they would have strengthened the contrast between femininity and masculinity further. To finally tie the look together, I incorporated  pieces from my own wardrobe that weren’t second-hand items, but staples I heavily rely on. I layered a simple black tee with graphic lettering underneath the tank, over which I wore an oversized, gray flannel. To cover my hair, I chose a solid black hijab. I would like to note that although I have incorporated my hijab into this look, I view it as a religious garment rather than a fashion statement. While my hijab often acts as a cohesive element of my outfits, I ultimately wear it to practice my Muslim faith. To further emphasize the boyish streetwear style I created, I wore a black baseball cap with the Dell and Microsoft logos embroidered on the front. My final touch was a pair of white Nike Air Forces with white crew socks underneath.

Weaning yourself off of fast fashion is not easy. In a culture driven by the adoption and circulation of trends, not being able to flex Balenciaga’s latest “ugly” sneakers or a piece from Off-White’s newest collection can make someone feel like they’re on the outside. Given these pressures, it’s no wonder that most fashion enthusiasts don’t turn to thrifting to get their fix of trendy clothing; second-hand clothing historically has been viewed as outdated and the exact opposite of fashion forward. However, experimenting with second-hand clothing can be a far more rewarding and eye-opening experience than you might think. By gradually incorporating thrifted pieces into your wardrobe, you’ll see your style become more elevated and altogether unique. So the next time one of your friends invites you to a Goodwill excursion, don’t be so quick to assume you won’t snag anything to your liking. You may come across some gems that will get you started on your own sustainable style journey.

All photography by Candy Khein. Check out her amazing portfolio here! 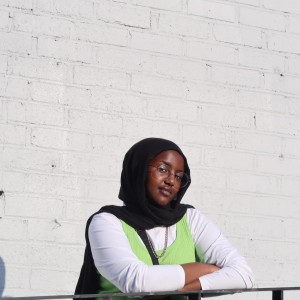 Awo Jama is a freshman journalism major at USC. Through her work, she hopes to provide more multi-dimensional coverage of the intersections of fashion, culture, and social justice.