A digital treasure trove of our college stories

As our seniors prepare to graduate and move into the next chapter of their lives, here are some pictures and words chronicling their last chapter. NEON called for any essays, photos, poetry from graduates that captured their past four years at USC. The response was overwhelming — riddled with deeply personal stories, introspective insights, and stunning stories of friendship. Through grueling GEs, awkward roommate escapades, and learning to navigate college party culture, students formed unique bonds that they will carry with them far beyond graduation. They say that “youth is wasted on the young,” but our seniors’ words confirm that they have savored every blissful, youth filled moment on this campus. As a senior myself, I can promise you that we have. We will look back on this digital treasure trove of pictures, clips, and articles to reminisce on our time at USC and shed light what it meant to be a college student in 2019. Scroll and enjoy 🙂 READ AND SCROLL THROUGH: An International Student’s Perspective — Sarah Soutoul

People always ask me the question “Why did you leave France, your home country, to come to college at USC?” For me, leaving meant getting out of my comfort zone to enter a world of adventures and risks; it meant leaving the people I love to be able to realize my own dreams; it meant meeting people with different cultures and values than the ones I was raised with; it meant seeing the sun rising at that beautiful lake in Lake Arrowhead, or looking at millions of stars while lying in a hammock in Joshua Tree, or singing my heart out at a musical festival in Palm Springs. It meant Maria, the person sitting next to me on my first day of class — who quickly became my best friend, or Tyler, that crazy boy at my first American party who turned out to be both my first love and first heartbreak, or Peggy, the professor who made me realize what I’m truly passionate about. READ AND SCROLL THROUGH: A House Becomes a Home — Dan Sheetz

Fast forward eleven months to September of our junior year. My goal of living in the house never wavered, each time I journeyed down Hoover street reconfirmed my ambition to occupy that faded blue Queen Anne. I called the landlord every other day for three weeks asking when I could join the waitlist to tour the property. Every single call I placed was received by an unenthusiastic, and eventually annoyed, representative from Mosaic Student Communities. One day I called, the list had opened and we signed up for the first tour of the year. We looked at three places before stepping foot in the house with an Orange Tree outside. When we finally walked inside, we were floored. If we’re talking about the decor, the furniture, the appliances, there was nothing to write home about. But the specialness of the house wasn’t material.

This house was special because it wasn’t a house, it was a home.

As my roommates come home, energy returns back into that house with the Orange Tree. I’m home again. As music roars and fluids are ingested, the magic that I noticed on my first day at the house seems to be revived.

Rapturous fraternity and raucous laughs fill the air and shrink in the walls, as each second passes we get closer and closer together.

Throughout our tenure at Orange Tree we were adding our own permanent mark. That mark was one of many left by previous tenants, one that would help build the foundation on which the next tenants would build their own home.

I thought about walking by the house with the Orange Tree and saying, “We should live there one day.”

SCROLL THROUGH: A Personal Photo Gallery By Max Gonzalez

READ: A Letter To Myself — Erica Wenger

Some future thoughts I have… hmmm… where to begin? It’s a crazy thought to be writing to the world of the future. I’m about to graduate from college and my Masters degree in a couple weeks and I have had the most memorable, magical time of my life. USC has brought me my closest friends and greatest mentors. I’ve discovered passions here that I never could have otherwise. We put on 2 OWN IT Women’s Leadership Summits to empower and encourage college ladies to believe they can do whatever they want. We are in a time where feminism and diversity are slowly being prioritized in the ways they should be, and I can only hope it’s continued in the future! Speaking of college I hope it has become more affordable and accessible in the future, especially a great school like USC. The price of higher education is unattainable, and I hope that has changed. I hope people have also figured out how to tackle the mental health epidemic and technology affects on the human psyche. I hope it doesn’t get worse in the future. But most of all I hope we have taken massive steps to preserve and SAVE our planet. I hope people get the chance to open this time capsule on a livable and functioning Earth. Signing off from the past! The most important lesson I learned from my undergraduate journalism experience and as Annenberg Media’s executive editor this year is that reporters are constantly doing one of two opposite things: learning or teaching. When telling a story, journalists first learn about a community – We listen to its constituents, we understand their stories and we analyze our findings. Then, it’s up to us to teach the public about the community’s issues and triumphs.

I have been so fortunate to learn and teach alongside my talented friends, coworkers and mentors at Annenberg Media. I have learned everything I know about journalism between the glass newsroom walls, and I’m so excited to continue growing as a journalist post-grad knowing that I have the foundational knowledge I need to succeed. Thank you to everyone who taught me what I know, and thank you for letting me be your student leader! Fight on. 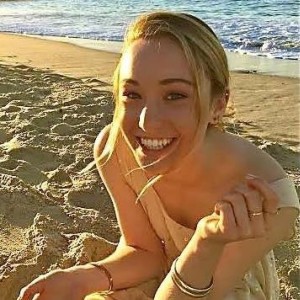